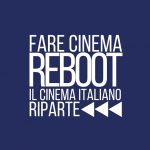 Portal of the Italian language
Categories: Culture and creativity -Cinema and Audio-visual
A project in collaboration with the Fondazione Cinema per Roma presents the faces and stories of contemporary Italian cinema to an international audience.

The cycle of interviews is completed by ‘Il nuovo abbraccio del cinema: dalla pandemia al set‘ (The new embrace of cinema: from the pandemic to the set): two video contributions present the reflections of important representatives of Italian film on the pandemic crisis, its effects on the industry and the creative professions. An intimate and original look devoted entirely to our ‘seventh art’, to its fragility and its resilience.

In the framework of the ‘Reboot’ project, the Italian Cultural Institute of Athens, Dakar, Hamburg, Ljubljana, San Paolo and Toronto present also a cycle of six online meetings with personalities from the world of italian and international cinema.

The video series can be accessed and viewed freely on the italiana Vimeo channel and the YouTube channels of the Italian Cultural Institutes worldwide.

The new embrace of cinema: from the pandemic to the set 1

The new embrace of cinema: from the pandemic to the set 2