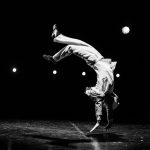 Portal of the Italian language
Categories: Music and Performing Arts
A stage festival with 39 theatre, dance and contemporary circus plays in video format.

An important project of the Italian Ministry of Foreign Affairs and International Cooperation has been dedicated to the performing arts, a sector that has been severely hit by the coronavirus emergency, with the aim of supporting the relaunch of the cultural industry. ‘Vivere all’italiana sul palcoscenico’ is a stage festival in video format which can be watched in full on italiana’s Vimeo channel (in Italian with English subtitles).

L’Universo nella testa (The Universe in your Head)
Fondazione Fabbrica Europa | Ass. Cult. Codeduomo
by and starring Cristina Donà, Daniele Ninarello, Saverio Lanza
The show expands upon a study between performative languages, working on the movements of the choreographer and dancer Daniele Ninarello and the songs of the singer-songwriter Cristina Donà, together with the composer and visual artist Saverio Lanza. A work that transcends the boundaries between genres to bring the international audience the poetry and best productions of Cristina Donà. Her voice and her lyrics in Italian intertwined with dance, and vice versa the shapes of the body created by Daniele Ninarello reflect and shine, continuously referring to the full meaning of words and the meanings of gestures.

Filippo Brunelleschi nella divina proporzione (Filippo Brunelleschi in the divine proportion)
Teatro Studio Krypton
concept and direction Giancarlo Cauteruccio
original playwright Giancarlo Di Giovine
script adaptation Giancarlo Cauteruccio
performer Roberto Viscont
music Gianni Maroccolo
set project Massimo Bevilacqua
visual processing Nadia Baldi and Alessio Bianciardi
literary and iconographic research AnnaGiusi Lufrano
camera operators Oronzo Cagnazzo and Matteo Castelli for Sicrea SRL Florence
video editing Alessandro Bozzi for Sicrea SRL, Massimo Bevilacqua, Nadia Baldi
organization and production Laura Scala
press office and promotion Pina Izzi
translation Marino Caliterna
The show, conceived by director Giancarlo Cauteruccio, is based on an original script that explores, through the most significant signs of the Renaissance, the complex personality of the great Florentine architect. Brunelleschi is seen in his hypothetical studio-laboratory, to capture and portray his physical solitude, the struggle and conflict he experienced with nature. The digital stage setting is by Massimo Bevilacqua, one of the most experienced artists in the application of video mapping to stage setting art. The music is entrusted to the talent of Gianni Maroccolo founder of the bands Litfiba and the C.S.I.

Creazione (Creation)
Evolution Dance Theater
Authors Nestor Saied, Silvia Luzon
Artistic Direction and Choreography Anthony Heinl, Nadessja Casavecchia
Direction Nestor Saied
A fusion of prose, dance and art, the show tells a simple and dreamlike story. Adam and Eve as universal symbols of a rebirth of emotions, meet again to discover fantastic landscapes, rediscover the simplicity and taste of discovery, the truth of their nature among visions and encounters with Beauty. Inspired by Mark Twain’s novel Eve’s Diary, the scenic fable portrays Adam and Eve, bioluminescent creatures ready to find each other and play in a new dimension.

La dolce vita
Associazione Teatro Potlach
with Aesop Studio, Iuvenis Danza, Specchi Sonori
Direction and playwriting Pino Di Buduo
with Marcus Acauan, Zsofia Gulyas, Nathalie Mentha, Irene Rossi
Stage setting, lights and video Stefano Di Buduo
Choreography and stage movements Greta Bragantini
A multidisciplinary show that originates from the worldly reality of the second half of the last century, depicted on the big screen by the film maker Federico Fellini. Inspired by Fellini’s visions, situations and characters that are now part of our cultural archetypes come back to life, thanks to the on-stage performance of four actors and an immersive scenographic system of lights and video projections. The social life of Rome in the 1950s and 1960s is so well represented in the film of the same name. Between theatre and cinema, between dream and reality, the show first of all asks: does the dolce vita still exist?

Amistade
Teatro di Sardegna
Production Sardegna Teatro Mixed Reality – RezzaMastrella
in collaboration with Fondazione Fabrizio De André | Teatro Vascello di Roma Fondazione | Sardegna Film Commission | Fondazione di Sardegna
A fusion by Flavia Mastrella, Antonio Rezza slipped from the lips of Dori Ghezzi
with Antonio Rezza, Ivan Bellavista and the extraordinary presence of Fabrizio De André
Editing Barbara Faonio
Amistade is a two-part story, that of Fabrizio De André recorded during concerts, and the live one of Antonio Rezza. Everything takes place in the material/visual habitat of Flavia Mastrella, enhanced by fragments of video projections and mapping. Ivan Bellavista joins Rezza on stage. An idyllic situation is interrupted by a violent act. The show addresses the issue of conditioning. Voice and movement alternate with the Fabrizio De André’s edicts, a voice from the past that opens up continuity with our present made up of abuse and extraordinarily effective mass media.

White Sound
Il Teatro nel Baule | Teatro in Fabula
Co-production Dante Society London – United Kingdom
Written, directed and performed Melissa Di Genova, Simona Di Maio
Original music Santy Masciarò
Light design Lorenzo Montanini
Set and costumes Maria Isabel Albertini
Assistant director Louis Bernard
Italian translation Rossella Natale
Collection of testimonials Roberta Niero
Recorded voice Carmela Perillo
Video Production Uncoso Factory
White Sound is the story of the life of an extraordinary woman: Lucia De Rosa, known as Rusell ‘e magg’. Lucia is looking for something important she cannot name. To help Lucia in the search for that lost something, there is a little girl who breaks onto the scene and it is this arrival that stimulates Lucia’s memory, opens the doors that give access to the memory. Here a journey to the past begins, accompanied by two bizarre scientists who introduce and discuss what happens to the brain when a neuro-degenerative disease or time compromises its functionality.

Meeting Points
Accademia Perduta | Romagna Teatri | Segni d’infanzia
Co-production Théâtre du Gros Mécano – Québec City, Canada
in collaboration with Atrium de Chaville (Paris), Musée National des beaux-arts du Québec, Benaki Museum (Athens)
Written and directed by Cristina Cazzola and Carol Cassistat
With the collaboration of Lucio Diana
On stage Sara Zoia and Daniele Tessaro
Set and lighting Lucio Diana
Graphic video animations Giulia Agatea
Original music Nicolas Jobin
Written and directed by two authors, the show is the result of an international co-production dedicated to an audience aged 7 and over. A fun journey back through the branches of family trees and migrations that have built the history of humanity; a patchwork of languages straddling Italian, French and English, designed to recreate in the spectator that feeling of disorientation often experienced by those arriving in a foreign language context. Two characters meet in a place without space and time. He is an anthropologist, she is a seller of souvenirs, patchwork blankets. They both find themselves, for work reasons, in a place of transit: an airport. They don’t speak the same language but gradually build a common vocabulary, communicating with simple looks, gestures and words.

Difficult Lovers
Teatro Libero Palermo Onlus
Co-production Do-Theatre Berlino / Saint Petersburg
by Evgeny Kozlov
From a project by Luca Mazzone and Evgeny Kozlov
With Davide Cannata, Federica Marullo, Edoardo Sgambato, Valeria Zampardi
Choreography and direction Evgeny Kozlov
Costumes and props Giulia Santoro
Lighting Mario Villano
Sounds, video and soundtrack Evgeny Kozlov
Voiceover Galliano Mariani
Music by Valentin Stip, Phil Von., Roman Dubinnikov and Mooryc
Technical assistant Fiorenza Dado
Video shooting and editing Pietro Vaglica
Set photographer Giovanni Franco and Luca Mazzone
A reflection on love, a thorny and difficult subject, which is nourished by the suggestions of an author who described the Italian republican identity, leaving room for civil reflection but above all for a vivid and distinctive depiction of Italian characters. Paying homage to the images of love that pervaded Calvino’s writing, Evgeny Kozlov, at the suggestion of Luca Mazzone, gives life to an original theatre-dance creation where different characters intertwine along the path of love. Bodies become letters and convey emotions, pictures of an existence where moments of life are broken down and captured in gestures and figures that recall desire, hope, disappointment, play, happiness.

Italian Playwright Projects – A Notebook for Winter
369 gradi
in collaboration with Umanism NYC – Martin E. Segal Theatre Center | Graduate Center City University New York – USA
by Armando Pirozzi
translation Adriana Rossetto
for the project Italian and American Playwrights Project curated by Valeria Orani in collaboration with Frank Hentschker
with Marco Quaglia and Stefano Patti
Direction Stefano Patti, Marco Quaglia
Set and costumes Barbara Bessi
Music Virginia Quaranta
Editor and executive production Valeria Orani
Organizational management Alessia Esposito
Written for two actors in three scenes, it tells the story of an introverted literature professor who, returning home, finds a thief, armed with a knife, who wants something very unusual from him: it’s a question of life or death. During the night that follows, the two characters, poised between hope and despair, discuss ideas, feelings and painful questions, in a dialogue that is new and unexpected for both of them. The two will meet again years later, still in some way marked by the experience of that night which, although lived and remembered in very different ways, has perhaps traced the possibility of a change, of a wider understanding.

JUMP!
Opera Bianco
Co-production Fondazione Royaumont – Paris, France
Concept, choreography and direction Marta Bichisao and Vincenzo Schino
Performer Samuel Nicola Fuscà, C.L. Grugher, Luca Piomponi, Simone Scibilia
Sound Dario Salvagnin
Administration Marco Betti
JUMP! addresses the issue of human rhythm in dialogue with the rhythm of the world. Dance is the answer to a question implicit in the environment around us: how to keep walking when everything is collapsing? The clown is a metaphor for the human condition. Buster Keaton continually alters his body and the physical laws that affect him in a stubborn march: he uses disasters to feed the rhythm of his gags. Pure dance in harmony with the movement of the world.

Giovanni Alighieri, Del Fu Dante (Giovanni Alighieri, son of Dante)
Associazione Culturale Xenia
with Massimo Popolizio
Dancers Spellbound Contemporary Ballet, Linda Cordero, Lorenzo Capozzi
Original music Marco Schiavoni
Choreography Alessandra Chirulli
In Giovanni Alighieri, del fu Dante Dante’s work and life are revisited from a specific perspective: that of a learned man, a scholar, who, in an imaginary dialogue, addresses Giovanni, the eldest son of Dante and Gemma, elder brother of the more famous Pietro and Jacopo, famous commentators on their father’s work, and of Antonia, a nun in Ravenna under the name of Sister Beatrice. For now, Giovanni’s biography lies in the very few words of two notarial documents from 1308 and 1314, which have emerged from the archives in the last hundred years of Dante studies. We do not know anything else about him. Giovanni is therefore still a slender man “on paper”, son of the twentieth century. The scholar, the protagonist of the show, played by Massimo Popolizio, will reconstruct Giovanni’s biographical profile and the history of the Alighieri family, but above all Dante’s work and the possible relationship between such an illustrious father and a son with an unfulfilled identity. 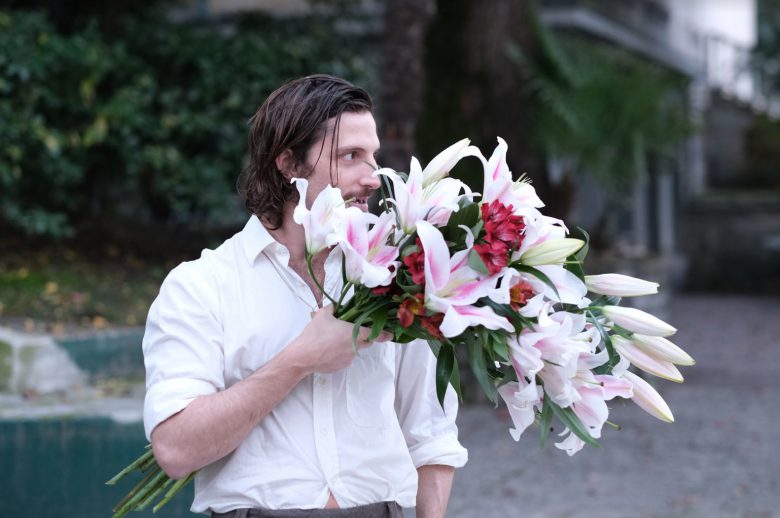 'Italia - Museo dell’Altrove' is a contemporary dance, performance and installation art project that unfolds in several settings and addresses the...